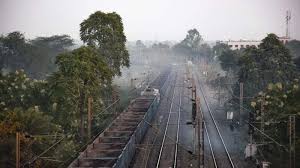 Indian Railways’ South Eastern Central Railway (SECR) zone on 22nd January has set yet another record by operating the longest freight train on the Indian Railways network for the first time.

“SECR Raipur division for the first time amalgamated five rakes of freight coaches from Bhilai D Cabin till Korba which falls under the Bilaspur division,” according to a statement by the Railways.”

The train which was named ‘Vasuki’ has a total length of 3.5 km and was operated with the help of one loco pilot, one assistant loco pilot, and one guard. It covered a distance of 224 km from Bhilai to Korba in seven hours.

Railways operate the long haul as it helps in the effective management of railway crew who are involved in the running of the freight trains and also helps in quicker transportation of goods.

Super Anaconda was a fully loaded three rake combined frieght train and it was followed by a 2.8km long four empty BOXN rakes train combined together which was named ‘Sesh Naag’.

SECR operated ‘Sesh Naag’ from the Nagpur division to the Bilaspur division which travelled a total distance of 260 km. All the rakes were combined at the Parmalkasa station at Chattisgarh and travelled till Korba for the loading of coal. A total of 251 empty wagons was transported between both the stations with the help of four electric locomotives.